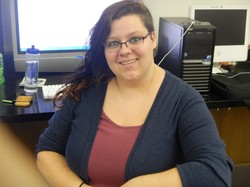 This is Emilie she is our only member left from the original Iron Chargers Team. Emilie is a senior this year and she has been in Robotics since her ninth grade year. We are sad to see her leave this year and wish her the best while she attends college. Emilie is the G Team programmer and helps with building the robot occasionally. 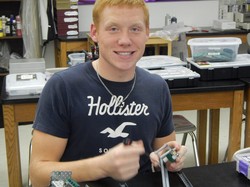 This is Dylan he joined the team last year and is the team driver and builder. Dylan is a senior this year and he plans on going to Northland Community and Technical College in Grand Forks for architectural and design. We are sad to see him leave and wish him the best after high school. 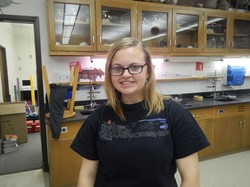 This is Hailey she joined the team last year and handles the teams design notebook and occasionally builds. Hailey is a senior this year and plans on attending Northland Community and Technical College for criminal justice. We are sad to see her leave and wish her the best after high school.

Past - 2011
In 2011 it was team 4149G's first year. Team G started with five members but ended up with four after one person decided it wasn't in their best interests. The game that year was Gateway and they decided on roller intake with rollers on each side of a plexi glass bottom. They achieved eighth place at the Thief River Falls NCTC tournament and also received the design award from the judges. Iron Chargers was decided as the name that year and it has stayed the same ever since.

Past - 2012
In 2012 it was team 4149G's second year, Team G resumed with the same four members. This year the game was Sac attack. Their intake consisted of a plexi glass trough with mini rollers that rolled in the sacs. They placed high in the Thief River Falls NCTC Tournament getting third place. After that they went to the Bemidji Tournament and placed first! That was the first year the Iron Chargers went to worlds. They enjoyed it a lot and decided to try hard the next year to make it.

Past - 2013
In 2013 it was team 4149G's Third year, Team G lost three of their member after they graduated only one original member remained. This year the game was Toss Up. This year the Iron Chargers gained a second team and six new members. Team G stuck with the plexi glass trough and rollers focusing on the boccie balls. They got first in the Thief River Falls NCTC Tournament and proceeded to St. Cloud. In St. Cloud they got the Excellence award from the judges and went to Worlds for the second time! They brought along the C team with them and they enjoyed the tournament not placing very high though.

Future
The G Team is going to be trying for the excellence award this year and hope to have new experiences and meet new teams. They plan to try their best and get along better.